I had an idea the other day for a Twitter account, but I wasn’t interested in investing the time to maintain it. Instead of letting the idea fizzle out, I thought, “why don’t I set up a Twitter bot to maintain it for the time being?” So that’s what I did.

Setting up the bot wasn’t very difficult but I noticed there weren’t many tutorials out there. Here, I walk you step-by-step through what I did.

Go to twitter.com, and create a new account for your twitter bot. Use an email address and phone number that you’ll be able to access (for confirming that the account is real). Pro-tip: If you use gmail, you can use a + variant of your normal email address if you’d like (Twitter currently won’t let you use the same email address on two Twitter accounts). 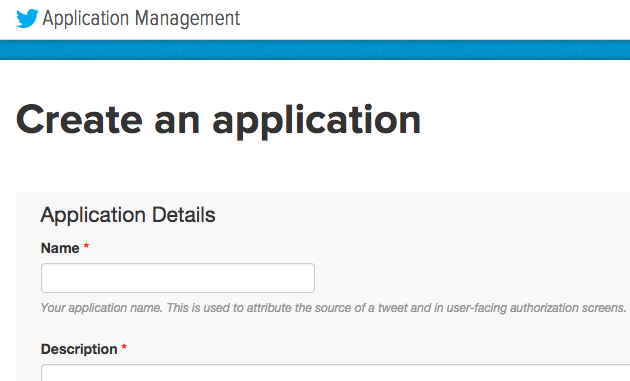 Many options, like Organization name, don’t matter much, but here are some of the important ones to look out for:

Now, in the “Keys and Access Tokens” section, copy down the following credentials (you’ll need these later in the process):

Now you need a Twitter bot. Bots are just scripts of written code. They can be made with nearly any programming language, and they can be as simple or complex as the programmer wants. Naturally, there are a lot of different kinds of bots out there, capable of doing different things. The bot I made was written in Javascript (specifically, NodeJS), and it simply retweets any tweets that meet specific wording criteria (that you set), from the accounts listed on a Twitter list (that you specify). I released the code as an open source project named twitter-listbot, so we’ll use it in this tutorial.

You’ll want to use git to pull the twitter-listbot code down from Github. If you already have git installed, you can open a command line terminal and run these commands:

You’ll need to customize a few settings in the bot in order for it to work for you. Open the file at twitter-listbot/index.js in your favorite text editor and substitute these values in the config object with your own:

To turn on the bot, first we need to download a few javascript dependencies, using npm. If you have npm installed, just run the following command in your command line:

You should see a bunch of activity in your console, downloading everything you need.

Now, let’s make sure your bot has access to the credentials it needs. Run the following four commands in your console window, replacing my placeholder values (the X’s) with the credentials you collected in step 2.

Note: this assumes you’re running a bash console. If your console is windows-based or otherwise, you’ll need to look up the equivalent command for setting environment variables for your system.

6. Move the bot to a server

You could leave the bot running on your computer, but it’s better to move it to some server on the internet where it will happily retweet things in isolation without you even thinking about it. I recommend using a service called Heroku because you can use their basic tier for free. Create a Heroku account at heroku.com, and then hop over to this guide, Getting Started with NodeJS on Heroku. You should be able to follow the guide loosely, deploying your Twitter bot code instead of the example code they provide.

One specific part that’s easy to overlook is moving your Twitter credentials into Environment Variables in Heroku. For that, you can follow these instructions, substituting the keys and values with the ones you used in step 5 above.

You’ll know the bot is running correctly when you visit your Heroku domain name (ex. http://yourappname.herokuapp.com) in your web browser and see the text “The robot is happily running.” And of course, the ultimate confirmation is that it will automatically retweet a tweet from somebody on your list.

Our goal is for this Twitter bot to run without interference or manual intervention, but unfortunately Heroku has a cost-savings measure in place which puts your server (and your Twitter bot) to sleep if it hasn’t seen any web traffic in over an hour. To prevent this, we just set up an automatic service which visits your server periodically, keeping it awake. I recommend Uptime Robot for something small like this because it has a free tier.

Browse to https://uptimerobot.com/signUp, and sign up for an account. Once you are logged in, set up a new monitor and have it check your new Heroku domain (http://yourappname.herokuapp.com) with an interval of 5 minutes. Not only will this keep your bot awake, it will send you an email if your bot ever goes offline for more than 5 minutes.

Again, what I’ve outlined is just one path to a working Twitter bot. With this bot in your control you can adapt the settings and code to make it do whatever you want. I used this process to build the bot behind @StoriesInData. If you decide to build your own, then let me know how it goes in the comments below.