I’m happy to introduce Writer, a Drupal theme designed for developers who blog. 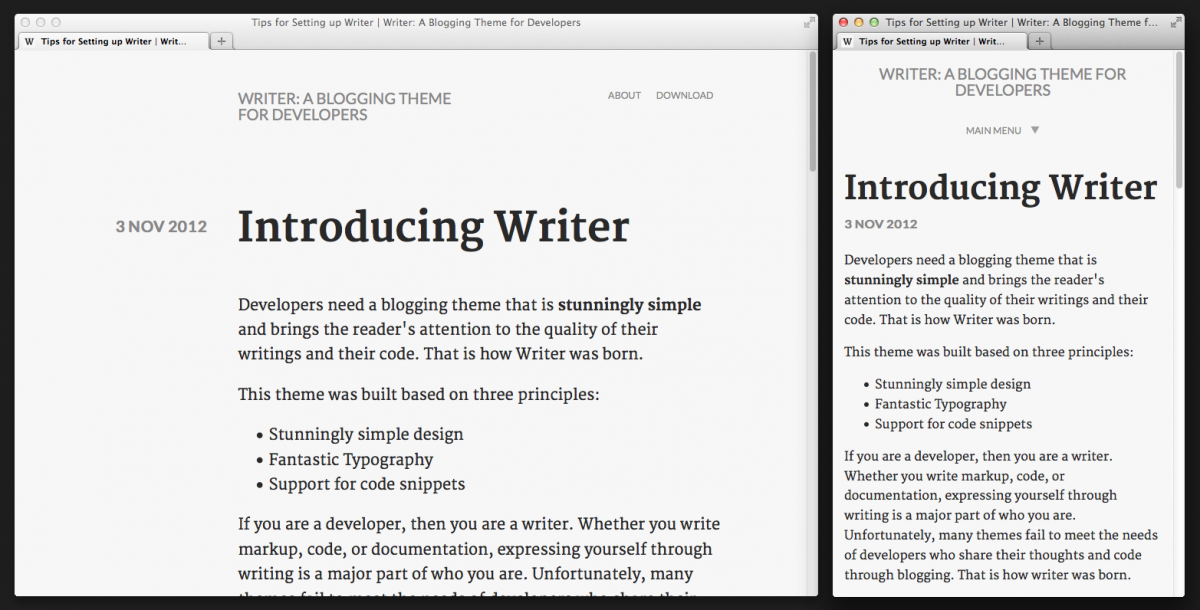 The story is quite simple. I am a front-end developer who blogs. I searched the Drupal theme repository, but I was unable to find a blogging theme designed specifically for developers. So I made one.

These principles guided me through the trade-offs and helped me make various design decisions. Let’s get into the details.

Developers have different needs than other bloggers. They don’t need sponsors or advertisements. They don’t need dancing emoticons or pink text on a purple background. They need… well, I wasn’t exactly sure what they needed. So I began asking them.

Design-wise, the answer was always “something simple.” Basic. Clean. As I continued my research, I looked up the blogs of many prolific developers to see what designs they used. Lo, and behold, the pattern was the same: “something simple.”

After checking out those designs and being sufficiently inspired, I brought my favorite attributes from all of them into Writer. Some of those attributes were:

On a design this simple, the typography is extremely important. This theme uses three fantastic fonts:

These fonts are all hosted by Google Fonts and it’s almost embarrassing how much time I put into finding and selecting them. Huge thanks to these font builders who chose to share their craft free of charge. I’m really pleased with the result.

If you had 4 hours to dig around through Drupal contributed modules and third party libraries, you could figure out a way to get styled code snippets on your site. But you don’t have that kind of time, so Writer comes with 4 code styles out of the box. Just go to the theme’s settings (at /admin/build/themes/settings/writer for Drupal 6, and /admin/appearance/settings/writer, for Drupal 7) and select the one you want.

This table shows what each style looks like for blocks of code (left) and for inline code (right). 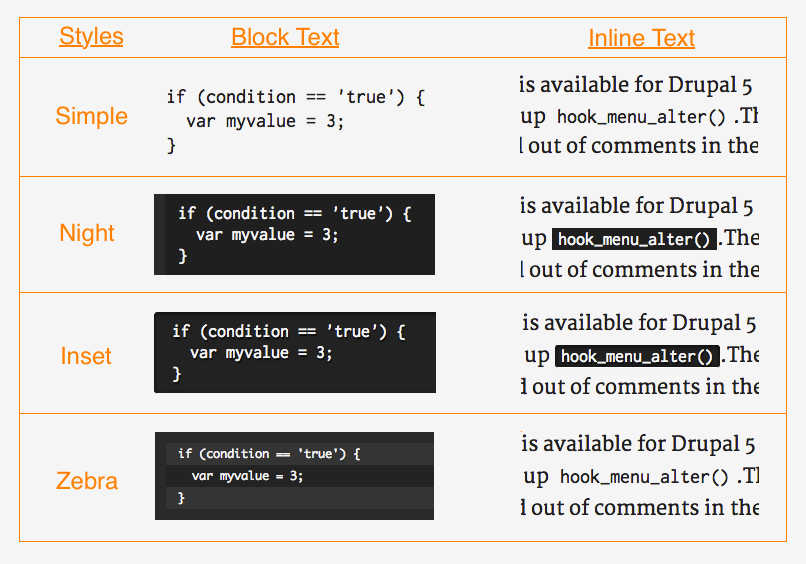 To invoke the style when you are blogging, wrap blocks of code in “pre” tags or wrap inline code with “code” tags.

That’s all there is to it.

There are many great Drupal developers who continue to use Garland or Bartik (the default Drupal themes) as the theme for their blog. These themes are fine but they were never designed to be used for a blog (not to mention that some would say their overuse has made them tacky). I don’t blame them… their alternative options are often bleak. Sometimes when I browse themes at Drupal.org, I feel like I’m browsing the web in 1994.