So for the last two semesters a couple of engineering students and I have been working on a problem: How do you safely and easily climb up a wall that has no climbing features. In other words, we want to get up something like this: 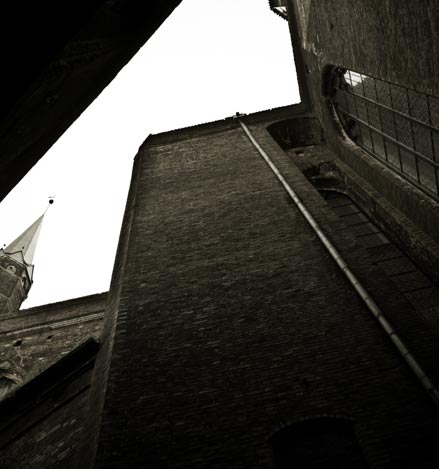 We were given about six months to develop the hardware that would enable us to climb a 90 ft wall just like this one. The constraints on our problem were many. Our solution needed to fit in a backpack (so much for that personal helicopter idea). It needed to be fast and effective, allowing four people to climb to the top of the wall in 20 minutes. Most of all, it needed to work, since we would be competing with it at the end of April 2012.

We were so excited. I mean, this is like a mechanical engineer’s dream, right? We had over a hundred ideas, though I admit, some of them were a bit outlandish – how long do you think it would take to train a monkey to tie a bowline? Ultimately, we narrowed in on a few concepts and went at it. We got materials, we called experts, we used power tools, and we ran calculations. There was only one problem… we kept hitting dead ends. Have you ever heard of an adhesive that holds 40 lbs/in^2 in under all possible surface conditions and cures remotely in less than five minutes? Here’s a news flash: it doesn’t exist. As we tried one potential solution after another, we kept butting up against the limits of current technology.

I realized why we always see solutions for this in Batman comic books, but not on YouTube. This hasn’t really been done before. Not well at least.

But we kept trying. We tried everything we possibly could think of (within the constraints of our budget, of course). Soon, we had a couple slivers of hope. And we pursued them. Once, when our solution concept was being evaluated, one of the senior professors said “It looks like you have something that may actually be feasible.” Now we’re talking!

What was it? We developed a rocket-shaped projectile that slides over the barrel of a standard US Military rifle. When the trigger is pulled, a bullet gets lodged in our projectile and launches it through the air. The nose of the rocket can be swapped out to accept a variety of different attachment objects: One containing an adhesive-based attachment, one that contains an anchor driver (similar to this), and one that attaches to a grappling hook. By building a modular solution, you can see that we can attach to just about anything.

Even as we are still finalizing the design details, our solution has received a lot of attention.

Last week we flew out to Ohio. We had done all we could and we were ready to put our solution to the ultimate test. As my professor says, “You can fool the professor but you can’t fool the hardware.” There were a lot of teams there with a lot of great solutions. There were suction cup suits, wall climbing robots, helicopters, projectiles, adhesives, and anchor drivers.

When it was time for us to compete, some things went well and others didn’t. Our adhesive based system failed spectacularly, getting blown apart as it left the barrel of the pressure cannon (we attempted to fire it at twice the pressure we normally tested at… not recommended). However, our grappling hook actually made it over the wall, hooked on to a lip and gave us the rope we needed to send a guy up. Our ascender worked beautifully, climbing at over 40 ft per minute. As far as we were aware, we were the only team that was able to get a guy up the wall and on top of the building. Other teams had incredible technology and most made it partially up the wall. It was an awesome event.

Now that it is all over, I can breathe a bit more easily. We hope to place in the competition and bring recognition to the school, but even if we don’t it will be ok. It has been great being a part of team attempting to push the fringes of technology. We’ve had our highs and lows, successes and failures. We came together as a team and pulled off a respectable result. I’m proud of my team and all they’ve accomplished.