Every day we’re faced with issues that threaten to distract us, create anxiety, and weigh down our conscience. Tax season is approaching. Your project is running behind schedule. It’s been 2 weeks since you last exercised. Your sports team is losing. You have a toothache. 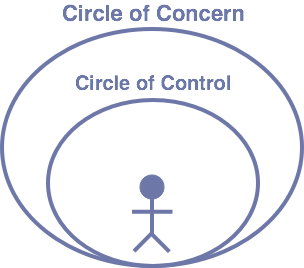 So your sports team is losing. Is that something that’s in your circle of control? Probably not, in which case you can safely tell yourself to let it go. Any energy spent being anxious about it is ultimately pointless— a tax on your health and well being.

So your project is running behind schedule. Is that something that’s in your circle of control? Well, some aspects probably aren’t, but others are. So we let go of the ones that aren’t and focus on the ones that are, thinking of things we can do to improve the situation.

Your emotional, reactive self doesn’t distinguish between the things worth worrying about and things that aren’t. The circles are simply a framework for bringing in your logical self who can help tell the difference.