hook_form_alter() is the go-to function for making changes to forms that are used across Drupal. We all use it. We all love it.

But since Drupal 7, you can also use a variant of this function: hook_form_BASE_FORM_ID_alter(). Here's a simple visual of how it works: 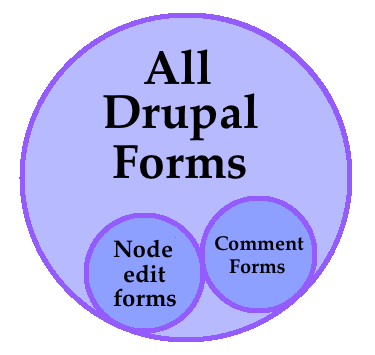 hook_form_alter() fires on all Drupal forms (the big circle). With hook_form_BASE_FORM_ID_alter(), you can restrict it to firing on a subset of forms (one of the smaller circles), which can save Drupal some processing. (to get even more specific, you could target a single form by using hook_form_FORM_ID_alter(), but I'll leave that discussion for another day).

You can find the Base Form ID by printing out the $form_state variable in a normal hook_form_alter, like so:

If you want to implement hook_BASE_FORM_id_alter, here is a simple example:

As you can imagine, these tools aren't worth much if you don't know which Base Form ID's are out there. I dug around Drupal core a bit and these are the ones I was able to find.

Base Form IDs in Drupal 7:

Base Form IDs in Drupal 8

As you can see, the API is implemented most thoroughly in Drupal 8. If you know about ones that I missed, just mention them in the comments below and I'll add them to the list.