What do you do when your own worst enemy is yourself?

I recently heard a story about a woman named Zelda Gamson. She was an older woman who had lived a very fulfilling life, having been a civil rights activist, among other things. Unfortunately, Zelda often battled with a lifelong smoking addiction that she couldn’t seem to kick. On one particular day, she felt a really strong desire to quit… so strong, that she made a deal with a friend of hers. It was an oath, with this friend as a witness, that if she ever smoked another cigarette, then she would donate $5,000 to the Ku Klux Klan. Period.

You can imagine how repugnant this donation would be, especially to a former civil rights activist. In fact, the idea of it was so bitter, that she knew that no cigarette, no matter how nice it would be, was worth such a horrible option. She just couldn’t bring herself to smoke.

Of course, that was the point all along.

Zelda had effectively taken part in what is called the Ulysses contract – a freely made decision that is designed to bind oneself in the future. And it worked. 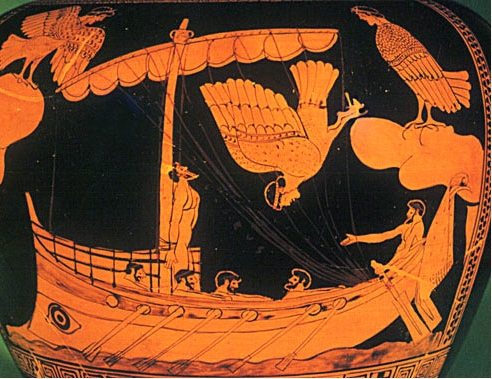 The name of this contract is derived from the Greek epic poem, “The Odyssey.” In it the protagonist and ship’s captain Ulysses (Greek name, Odysseus) desires to hear the song of the sirens. The goddess Circe told him that any sailor who heard this song would be so mesmerized by it’s enchanting qualities that they would direct their ship towards the source of the song and crash it into the perilous rocks of a nearby island. He was to avoid the area at all costs. However, Ulysses’s curiosity was so strong, that he came up with a plan for him to hear the song. He filled the ears of his crew with wax, rendering them unable to hear. Then he had himself bound tightly to the mast of the ship. What’s more, he had given his crew instructions that no matter how he reacted, they were to keep on sailing forward, and not untie him, until they were safely beyond the reach of the siren’s song.

See the similarities between this and the first story? In this case, Ulysses submitted to literally have himself bound, but the principle is the same. In both cases there’s a contract that restricts future freedoms in an effort to achieve an outcome (and it case you were wondering, Ulysses’s plan succeeded as well).

This is one of the most popular parts of the Odyssey, even thought it takes up less than 40 lines (in a poem that’s over 12,000 lines long). In thinking about it, I’m starting to understand why.

Ulysses’ dilemma is a very human weakness and one people face everyday. We can look at ourselves as two different people: the ‘now’ self, and the ‘future’ self. The ‘now’ self is smart. He (or she) can see all of your options and the potential consequences of each choice. He is capable of making informed, rational decisions about what you ought to do in any given moment. Unfortunately, the ‘future’ self is the person who actually faces those decisions and the ‘future’ self is weak. Given the opportunity, he (or she) gives in to the moment and often makes poor choices. Whether that choice is a cigarette, a credit card purchase, an extra slice of cheesecake, or just one more episode of “Lost”, the concept is the same. It doesn’t matter what your better judgment says. That person is gone when the time to decide arrives.

That’s why the Ulysses contract is so interesting. It give you a way to strong-arm your future self into making the best choice.

Such is the aim of a Russian treatment for alcoholism known as the Dovzhenko method. It’s crazy, folks. I won’t go into much detail, (you can hear the full story here, explained much better than I can) but I’ll summarize. The concept is to implant a small pill underneath the skin, which contains the chemical Disulfiram. It has the effect of causing a litany of horrible symptoms… potentially even death, to the person who consumes even a small bit of alcohol while the treatment is active. While the seriousness of the symptoms and the length of the active period is under scrutiny, the controversial method is a bona-fide Ulysses contract. And like the others, it often works.

Alcoholics Anonymous actually uses the contract too, though in a much different way. Their program is designed to create strong social structures that, while not binding, are very influential in preventing you from drinking.

There are even apps and websites like stickk.com, that allow you to build your own Ulysses contracts and actually commit to your goals. The list goes on and on.

Of course, I’m not exempt from the human weakness we’ve been discussing. Nobody is. For me, the ‘now’ Bryan sets his alarm so he can get up early and do some to-do list butt kicking. Unfortunately, the ‘future’ Bryan usually prefers to sleep in. On and on, goes the endless battle between these two people. ‘Future’ Bryan also has a procrastination problem. If knowing your enemy is half the battle, then it’s the easy half. I’ve got a pretty good idea of who this ‘future’ Bryan bloke is. It’s being clever enough to outsmart the guy that’s the challenging part. Let me know if you have any ideas (lifehacker links are acceptable too).