I’ve always wanted to do a road trip around the United States. I didn’t think it would be mandatory.

But here we were. We needed to be out of our apartment by July 25th, at my sister’s San Diego wedding by July 28th, in Spokane Washington by August 3rd (wedding reception), and in Washington DC by August 8th (1st day of work).

There weren’t many options. We could have a moving company handle our stuff and organize a dizzying arrangement of flights. Definitely possible, though the anemic, tuition-scarred, hospital-bill-laden, wallet would certainly suffer. After evaluating the costs of getting situated in DC, this option was eliminated. We chose the second option… selling off whatever we own that cannot fit in our car, and driving with the rest on a 5000 mile, 2-week, road trip.

We didn’t own much, by current American standards but it was still very difficult. We built a complete inventory of everything we own… totaling about 1000 distinct items. That’s when the purging began. We evaluated everything (at least subliminally) on a value per unit volume basis. Some things had monetary value… iPods, jewelry, and so forth, while others had emotional or sentimental value (ticket stubs, photo albums, etc). At some point, a threshold was drawn, and those with the least value per square foot were purged. Like a controlled house fire, burning all our possessions except those we can carry in our arms, the purging raged for several days.

When it was all over, everything we owned fit into the back of our car. To my delight, the feeling was incredibly liberating. Owning a lot of things is stressful. You have to find places to put them, tools to fix them, ways to clean them, time to organize them, and energy to move them. Perhaps I’m a minimalist at heart.

We were homeless. There wasn’t even a place waiting for us when we would arrive in DC. We drove during the day, and I was supposed to be apartment hunting online each night but the task always seemed to get ousted by something else important. A lot of time was spent sleeping on hotel beds and living out of our suitcases. And it wasn’t that bad. We had a roof over our head, ways to stay clean, and free continental breakfasts. Most homeless people aren’t as fortunate.

We stopped for a bit in Spokane, and my Dad was kind enough to spend a whole day with me checking on the condition of my car, a 15 year old Suburu with 160,000 miles on it, to see if it could go another 3000. We worked on a lot of things and I was really grateful for his help.

The next 4 days was a driving marathon like no other. Each morning I would get up early and drive. 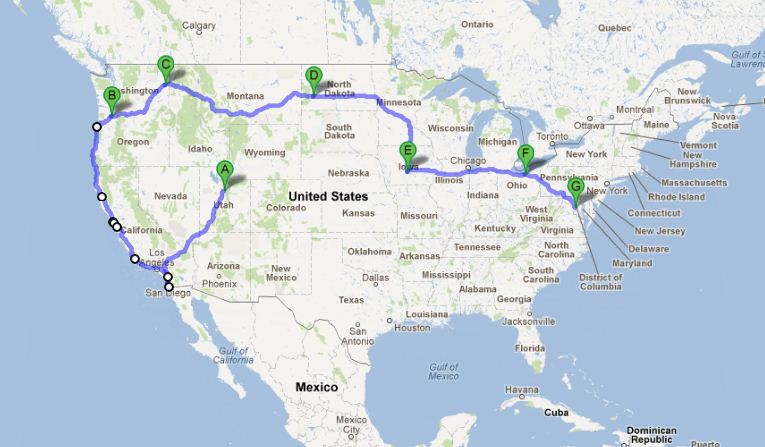 You get the picture.

I didn’t stop to rest and didn’t stop for food (I had some food to nibble on in the car). Regardless, it was always night time when I arrived at a place to stay the night. I was pushing 12 to 13 hour days in the car, and going against the time zones, which meant I often arrived at 11pm or later. It was a special type of endurance test and I was extremely relieved to have arrived without incident.

You see, I had absolutely no room for error. Even with 12 hours of driving a day, I arrived in Virginia on August 7th at 5pm, and reported to my first day of work the very next morning.

While many could have considered it miserable, a part of me really enjoyed it. I got to see nearly the whole country. I did 17 states in 14 days… and these weren’t those puny New England states. I drove the entirety of California, from the bottom to the top, and then the full length of Montana, from West to East. I saw the redwoods, the Oregon coast, the Rocky Mountains, Sturgis motorcycle riders, downtown Chicago, field after field of growing corn, and the dense forests of the northeast. I saw gas station restrooms with granite counter tops and endless trails of white windmills spinning in the breeze. After years of living in a 500 sq. ft apartment within walking distance of everywhere I needed to go, driving as long and as far as I could was really quite refreshing.

And what’s even better is the adventures haven’t stopped. We’ve started a new life in the Washington DC Metro area, a happening place by it’s own merits. We are minutes away from the foundations of our country’s history. The Washington monument is visible from my office window. And I love being in a big city, walking the streets, going new places, having new experiences, making new friends. Heck, I saw a giant squid at the Smithsonian the other day. A GIANT SQUID!

I named him Leroy.