This week we moved into a different apartment. It is virtually identical to our last one, but this one has another bedroom (for the little lady). While we were unpacking I had a thought.

“Instead of just putting everything where it was before, why don’t we try and set it up in a better way?”

We sat down and brainstormed about what things were a pain to find and use in our last apartment. For example, in order to restock printer paper, we always had to dig deep into our closet, tripping over all sorts of things. This time, we looked at the things we used the most and planned to put them in the most convenient and easy to reach locations. Some of these would seem like no-brainers, like putting the DVDs in the room we plan to watch them, but you’d be surprised how often this wasn’t the case in our old apartment.

We also wanted to encourage good behavior by making it easy to do good things and hard to do bad things (think putting the raisins at eye level and the chocolate chips on the very top shelf). Small things like putting your scriptures on an end table next to your favorite armchair while making your computer chair hard and uncomfortable can encourage you to spend less time on Facebook and more time in the good book.

The point is, a little planning and organization right now can help make our lives more balanced and efficient. This is the concept of living deliberately.

It sounds so simple but in reality it’s hard. We usually find ourselves giving up what we want most for the things we want now. Couples will spend many months (even years) and thousands of dollars planning their wedding and then fail to plan their marriage.

Choosing a career is even worse. Lots of people just wait for somebody else to tell them what type of work to pursue. I’ve even heard stories about college students selecting their major based on which sign-up line is the shortest. Perhaps you planned better than that, but how much better? Did you spend one evening looking up careers online? Or did you pick it out of that “Top 10 Hottest Careers for the Future” article in Newsweek? Many people will spend more effort on a big research paper than on researching their own career options. A survey by the Rockport Institute reported that 64 percent of the college seniors questioned said they had serious doubts that they had picked the right major. I’d like to hope we could do better than that.

In Nicholas Lore’s The Pathfinder, he talks about building a lifeline, or, a timeline for your life. The timeline ranges from the beginning of your life to the end. It has space for you to fill the past with things you’ve done and the future with things you want to do (aka goals). Putting these things down on paper brings a certain reality to the fact that you are still going to be doing something 20, 30, 40 years from now. More importantly, the decisions you make today (like the classes you take, or the jobs you choose to apply for) will either take you towards your goals or away from them. 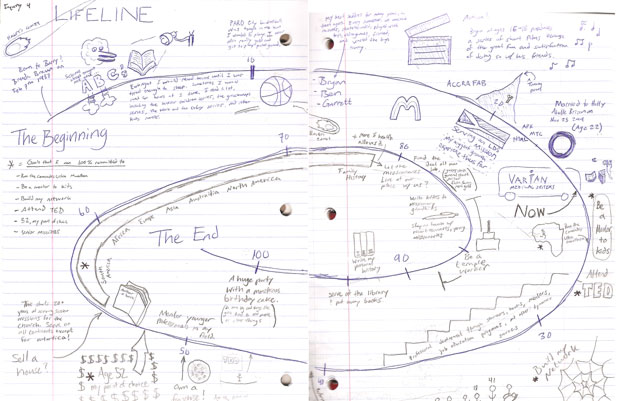 Working on my lifeline definitely opened my eyes to some interesting thoughts. Like, what do I want to spend my time doing between the age of 70 and 80? I’m not about to spend my life scrimping and saving for retirement so I can waste away the golden years watching daytime reruns of The Price is Right.

Life is far too precious to let it be blown about by the winds of circumstance. The greatest athletes, actors, and singers didn’t accidentally become the best in the world. And those 47% of Americans that don’t own a retirement account aren’t going to accidentally retire with dignity.

But that’s nothing a little planning can’t fix.