It can get you out of anything. A nearly universal excuse.

During my senior year in high school I asked a teacher of mine to write a letter of recommendation for me. I asked him pretty far in advance, but when I followed up with him several weeks later he said he hadn’t had the time to get to it. I called him out. I told him that he had plenty of time… 24 hours each day, to be exact. It’s the same amount of time that everybody else has. But he had chosen to do other things with his time than write my letter. No… time was not the issue. It was his priorities.

Now, lest I come off as a super harsh and insubordinate, you’ve gotta understand that I had a good relationship with this teacher and we liked to tease each other back and forth. I once took a message on the classroom phone for him. After the call I told him (in front of the class) that the office was calling to let him know that his car had gone missing from the parking lot. I got him good that time.

No, the priorities stunt was nothing more than a reminder to move along on the letter of recommendation, which wasn’t due for a few more months. (by the way, I did get the letter, it was well written, and I got the scholarship… boo-yah!)

The principle is true. Time is not a commodity like money or soybeans or water. We receive free time every morning when we wake up, with which to do whatever we want. We cannot give it to one person, or take it from another. All are given an equal measure, rich and poor, black and white, male and female. It is the most fairly distributed commodity on the planet. And because it is so consistent, how we use our time is a perfect indication of our priorities.

A few years ago I spent a week recording how I used my time each day in my journal. I divided my 24 hour day into a pie chart, and represented the days activities via slices of the pie. The activity was designed to help me better see how I used my time that day. The results were shocking. (this specific image was one of my better days… I don’t want to incriminate myself too badly) 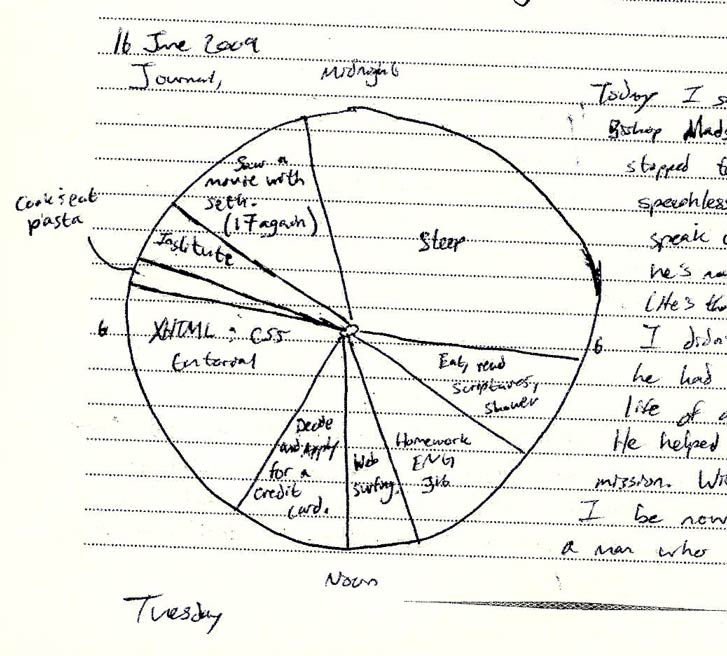 In general, it was hard for me to believe how much time I spent on unnecessary things (me? productive me?!?). After one week of accounting for my days in this manner, I had a much better understanding of how I *really *spent my time. We start each day with an empty pie and fill it up with stuff until it’s time to go to bed.

Inevitably, we fall asleep with items still on our to do list. Truly, these items were not as important to us as the things we did. That doesn’t mean they weren’t important. We are constantly making trade-offs between several important things. I tend to over-commit myself, which forces me to choose between conflicting interests. It always seems like I’m in a hurry. If I had 25 hours in a day, I’d fill it up it an instant (just like I do every fall during daylight savings).

Like you, I also have days where I’m constantly catching things right before they hit the floor. Why do we wait until the last moment to catch them? Because that’s when they become a priority. You see, “I’m busy” is fundamentally different then “I have no time.” The second implies that we have no choice. We always have a choice. As I write this sentence, I’ve got a sink full of dishes that need to be washed. It is important for me to wash them (I like a clean kitchen as much as the next guy); it just seems like other important things keep coming up. Consequently, I keep choosing not to do it. But tomorrow morning, when I have no clean bowl for my oatmeal breakfast, washing the dishes will become a very high priority for me, no matter what other things I have planned. And suddenly, I’ll have the time to do it.