When I was younger I kept a drawing book. This book is famous among family and friends. The whole purpose of the book was that it would be filled with random (and usually humorous) drawings. Skill was unnecessary. There were no rules. No two drawings were alike. It was great.

While those days have come and gone, I still have to have an outlet for my creativity; something… anything, to keep me from turning into a crusty old coot. These days, I been working on something really great: My Book of Impossible Ideas.

Now, this isn’t a formal book. It’s more of a spiral notepad filled with illegible handwriting, and curious diagrams. Regardless, I keep it with me at all times, just in case I get an impossible idea.

I first heard about keeping a book like this when I was reading Dan Miller’s “No More Mondays” (a neat book, by the way). Dan mentioned such a book only briefly, as a suggestion for breaking out of a rut and coming up with ideas for starting your own business. Now I wasn’t planning on starting a business but I liked the thought of the book. It took a few weeks for this suggestion to sit in my brain and ferment but I eventually said “why not?” Now that I have one, I gotta tell you, its a lot of fun. Let me show you.

Here are a couple ideas I recently put in there. 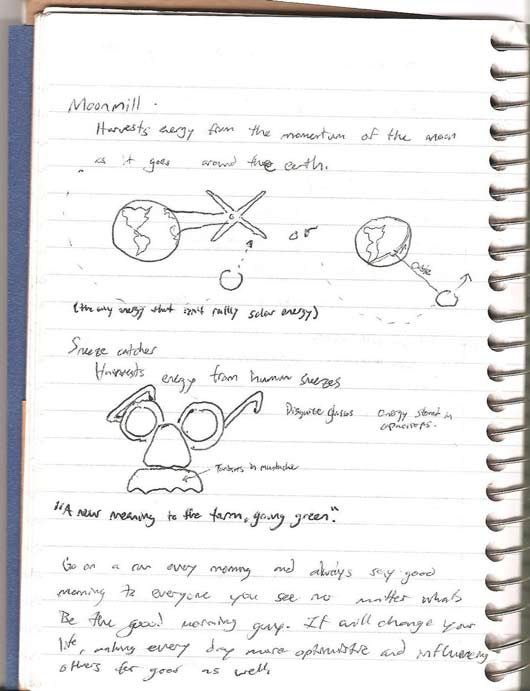 I was thinking about solar energy and I realized that almost every kind of energy we use on this planet came from the Sun. The energy in food, hydroelectric power, even fossil fuels can trace their energy back to the Sun. So I started to wonder where we could get energy that didn’t come from the Sun. That’s when I realized that there is an incredible amount of kinetic energy stored in the momentum of the Moon as it orbits the earth. Maybe we could take some energy from it’s motion just like a mill takes energy from moving water (see diagrams).

While I was looking for alternative forms of energy, I remembered a factiod that a human sneeze can travel up to 100 miles per hour. Now that’s powerful! I figured that if you could retrofit a pair of disguise glasses with some small turbines in the nose and mustache, then the wearer would be able to harvest energy from the sneeze. Maybe if you sneezed enough times then you could store the energy and use it to charge your cellphone. It brings a whole new meaning to “going green” (wah, wah, waaaah… bad pun).

Strictly speaking, the ideas don’t have to be impossible to be in my book. While some of them are really farfetched (like my ipod earrings or my laser beam underwear) others are actually quite feasible (like my online store that sells zombie apocalypse supplies, or candy corn on-the-cob). Really, the value in this exercise is that I’m never afraid to write my ridiculous ideas down. One day, when I actually get an idea for that invention, book, website, or business that could make it big, I’ll put it on paper instead of calling it impossible and letting it drift off into the breeze.

And when you really think about it, every worthwhile idea is ridiculous. Imagine the first guy who thought about recording sound for playback. The only thing they stored back then was stuff like wine and jam. Storing sound? Where would you put it? When would it go bad? Or picture the first person to ever try drinking the white fluid from the udder of a cow. It sounds like an episode of Fear Factor. These were a ridiculous, impossible ideas.

It reminds me of the story (from my chemistry textbook) of the first gas inflated balloon, sent into the air in August 1783. The balloon floated high in the sky, before descending near a village about 15 miles away. We are told that the village peasants were alarmed as they saw the unfamiliar flying object and destroyed it as it neared the ground, beating it with pitchforks, flails, and sticks. To them, the flying object was unexplainable… a demon or monster or some other fearful thing. Likewise, we cannot now understand or comprehend what great technology remains undiscovered. We remain trapped by our perceptions of what is and is not impossible. That’s why no idea, no matter how ridiculous it is, is too impossible for my book of impossible ideas.

And who knows? Maybe my pair of laser beam underwear isn’t that farfetched after all.

Do you have a crazy or impossible idea you want to share? Just add it to the comments!