One year ago, I was the biggest of all twitter skeptics. I had heard a lot about twitter but I kept asking myself, “yeah, but what’s the point?” Why would I want to send random mini-posts out to people who don’t care? How is this any different than facebook status updates? And what’s with all the cheesy bird icons that are cropping up all over the internet (see what I mean here). I thought it was just a waste of time. But it’s been about 6 months since I got my account and now I see the light. Twitter is organized in such a way that there is potential for some really interesting dynamics. I’m convinced that everyone should get an account, and these are my reasons why:

The biggest difference between Facebook and Twitter is that a “facebook friend” is different than a “twitter follower”. On Facebook, your “friends” can see everything. Your photos, your contact info, your Mom’s name… everything. And you can see all of their info too. On Twitter, following someone is a different experience. You don’t get any more information about them. Following them doesn’t mean you are stalking them (as Holly initially suspected). Following someone means that their tweets (updates) will show up on your news feed. That is it. If you are interested in what someone has to say then you follow them. You can follow anyone you want. This makes it easy to hear what people are talking about outside your circle of friends. That is why things go viral on twitter so quickly.

When I read the newspaper I read the front page articles, hop to the editorials, skip the music and arts section, catch a few comics, skip the business section, and finish up in science/technology. On twitter, I can forget all the skipping and get all the specific news I like in one location. How? I follow people who share news that I like. If I am interested in learning about new products from Apple, I can follow @MacRumors or @mashableapple. These people are going to be sharing links about Apple stuff. For example:

If you want to know what new books are coming out you can follow @latimesbooks or @nytimesbooks. Got a favorite band? Follow them and see what they’re up to. I like @jimmyeatworld, @deasvail, and @dcfc (Death Cab for Cutie, of course). You can find almost anyone. Lance Armstrong: @lancearmstrong. Weird Al: @alyankovic. Richard Simmons: @TheWeightSaint… even Pee Wee Herman: @peeweeherman. You pick the news you want to hear. The other day Holly told me she wanted to keep up on news in the teaching profession. Now we could subscribe to a magazine or something, but why not just follow some thought leaders in the teaching field? You’d be surprised at the quality of information you can get. I just “follow” people who share news I am interested in and watch it come to me. Which brings me to the next reason:

3. Filter the garbage on the internet

When you follow interesting people, you will find that they bring the cool parts of the internet to you through links in your news feed. This especially happens when you follow people with the same interests as you. The days of typing random things into Google to see what you will find are long gone. Now I’m not saying there isn’t garbage on Twitter, because there is. We’ve actually graphed what percentage of tweets is pointless babble.

That’s a lot of babble. Fortunately, you don’t have to look at it. If the people you follow like to engage in pointless babble just click “unfollow” and it magically goes away. Keep following interesting people and your feed will stay fresh with cool, relevant info.

There are two parts to twitter. Listening, and talking. So far we’ve discussed listening and how twitter can deliver juicy bits of information and news. But if you are on Twitter then you also get a chance to speak. Sending a tweet is like sending a non-committal mass text to a group of people interested in reading it. Think of it as a place where you can stand on your soapbox and share things with the world. Have you noticed that most stuff on the internet now has an option to share on twitter? 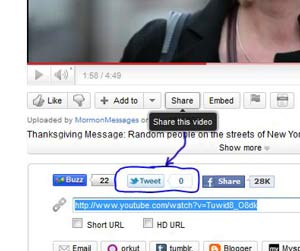 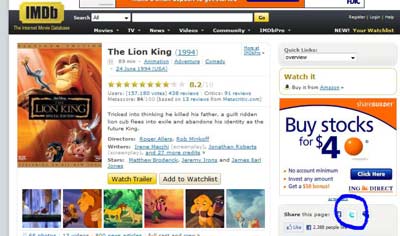 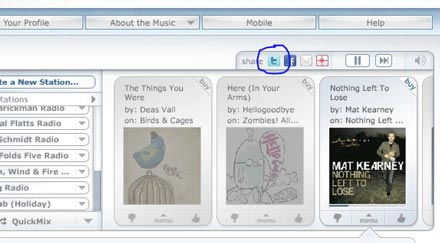 Once you have a twitter profile, you can click these buttons and easily share things with people. In general, your followers will be the only ones who hear you so the more followers you have, the bigger impact you can make. And there is power in having a crowd of people willing to listen to you. You can complain about T-mobile’s customer service, praise a sweet iPhone app, or promote a good cause. Heck, your tweets may influence people to check out your friend’s new band. If you want to share what you had for breakfast, that’s fine, but who is going to want to hear that? You never know when you are going to have something really important to say.

We all live in this world and we ought to stake our territory. Putting ourselves online allows the world to see more about who we are. We can choose to live a life of obscurity, hiding where nobody can see us but why would we want to do that? “Neither do men light a candle, and put it under a bushel, but on a candlestick; and it giveth light unto all that are in the house.” Sound familiar? You can be smart about it… you don’t have to tweet out your banking information or racist jokes. It won’t be long until employers are checking Twitter to see if job applicants are duds. I’m not worried about it. I’m not a dud.

So that’s it. As with learning any new thing there is a learning curve, but it may be worth your time. At least it has brought some value to my life.

And for the record, I still don’t like the cheesy bird icons.