The Dvorak keyboard layout is an alternative to the most common computer keyboard design, the QWERTY keyboard. You know that you are using the qwerty keyboard if the first six letters on the upper row of your keyboard spells Q-W-E-R-T-Y.

Why the different layouts? The QWERTY layout was designed first for the early typewriters. The Dvorak layout was designed to increase typing speed, decrease finger strain, and simplify typing. It is called the Dvorak Simplified Keyboard after Dr. August Dvorak, its inventor. While the Dvorak layout seems better suited to the needs of today, QWERTY remains most common. I won’t go into depth because several other great articles cover the history:

What bugged me the most about the Dvorak story was that it was a better keyboard design but we were too steeped in tradition to accept it. We were too lazy to learn a better way. After my research, I wanted to learn it but I needed to know how long it would take. I was afraid it would slow me down and hurt my performance at school or work. When I couldn’t find any info, I decided to record my own data by and tracking my speeds from day to day. Here is the data I got (see below for my methodology). 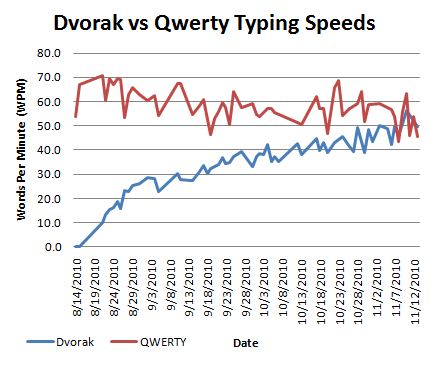 Basically, it took me about 3 months to go from nothing up to speeds comparable with QWERTY.  My average speed with QWERTY has dropped a bit (you can see the drop in the data but I didn’t notice it as I typed). Now I can type both kinds equally and I am able to easily switch back and forth between them (it takes me a minute or less to reorient myself after switching). I imagine that my speeds will continue to improve as I continue to use them. Learning was challenging at first but became fun as I started to make progress. I know I would have learned it much faster had I not worked to stay sharp in both QWERTY and Dvorak. That was what slowed me down. Ultimately it was worth it though, because knowing them both seems to work best for me.

Am I glad I did it? Absolutely. I’d recommend it to anyone. It also feels good to cast my vote. It is a vote for research based design, for making our lives more efficient, and most of all… for mankind to learn better technologies instead of being too stubborn to change. The world is accelerating, and those who are unwilling to embrace change will soon be left in the dust.

Methodology: I ordered transparent keyboard stickers for the Dvorak layout to put on the keys of my laptop. After applying the stickers, I enabled keyboard layout switching on my laptop. I started going through the typing lessons at this website, spending maybe an hour each day until the lessons were done. Once the typing lessons were done, I chose to use Dvorak at home and QWERTY at work in order to practice them both each day. Each day I would go to typingtest.com to test my speed. I would randomly select three tests from their selection for both Dvorak and QWERTY. I would take the three tests, switch my keyboard layout, practice for a minute or two (to get used to the switch) and take the other three tests. I averaged the three test scores and plotted the values each day. I spent no other time practicing beyond the time I spent typing in my normal daily activities.